Festivities and Popular Celebrations in Alicante

Festivities and Popular Celebrations in Alicante

Alicante is synonymous with party. On this province of the Costa Blanca, a series of traditional festivities with unique characteristics which have achieved universal fame, occur throughout the year.

From the famous Moors and Christians of Alcoy to the Bous a la Mar of ​​Dénia, travellers can discover these destinations through their folklore and deeply rooted traditions. An entertaining and enriching way of doing tourism.

To learn about some of the essential festivities in Alicante, we start this journey in Alcoi. The locality of the region of l'Alcoià can boast of celebrating some festivals, such as the Moors and Christians of Alcoi, which have been declared of International Tourist Interest since 1980, and considered, together with the Fallas of Valencia, as the cradle of many other festivals celebrated in the Region of Valencia.

They take place from the 21st until the 24th of April and pay tribute to the historical events that took place in the city in 1276, related to the uprisings of the Muslims who inhabited the area and who gave rise to the patronage of San Jorge. A particular way to celebrate the arrival of spring.

Near Alcoy is Ibi, a town known for the toy industry production that, on December 28, the Day of the Innocents, celebrates the Enfarinats, when the people under their capricious domination change surprisingly. It is a popular party that has as its central act a peculiar and explosive pitched battle with vegetables, firecrackers, and flour between two satirical sides that symbolically struggle to acquire Ibi's political power.

One does not have to go far away to follow the route for the most popular parties and celebrations in the province of Alicante. In the nearby town of Cocentaina, in the Comtat region, on the 1st of November, one of the oldest festivals in Spain takes place. It is the Fira de Tots Sants, dating from the year 1346 by the royal privilege granted by Pedro IV of Aragón to the Count of Cocentaina at that time, Roger de Lauria. It is a ludic and commercial concentration full of craft stalls, food, and children's fair rides.

The Bonfires of San Juan stand out in the capital of Alicante. What to say about them? From the 19th until the 24th of June, the official festivities of the city are celebrated. Declared of International Tourist Interest and Intangible Cultural Interest, more than 200 papier-mâché monuments are constructed throughout the length and breadth of Alicante city during the week of festivities. Similar to the Fallas, the bonfires burn with the purifying fire of the Cremá on the 24th. But before that, one can enjoy many other acts such as the Plantà, the Flower Offering, the Bands' Entrance, the mascletàs, the fireworks, the Folkloric Parade, etc.

On the way to the Baix Vinalopó region, the traveller arrives at Elche, where, if the immensity of the Palm Grove allows it, one can enjoy, in the middle of August, the Misteri, a liturgical feast of medieval origin declared an Oral and Intangible Heritage of Humanity by UNESCO. The Basilica of Santa María hosts this representation that celebrates the feast of the Virgin of the Assumption in the form of sacred-lyrical drama. It is the only work of its kind that has been represented annually without interruption until today, whose origins date back to the second half of the fifteenth century.

We set sail for the Marina Alta to learn more about one of the most popular festivals in the Region of Valencia. It is none other than the Bous a la Mar, the patron festival of Dénia that takes place during the second week of July in honour of the Blessed Blood. It is a celebration in which the participants try to get the heifers to fall into the water. Then, they are rescued with the help of a boat to return to the mainland and continue the party. 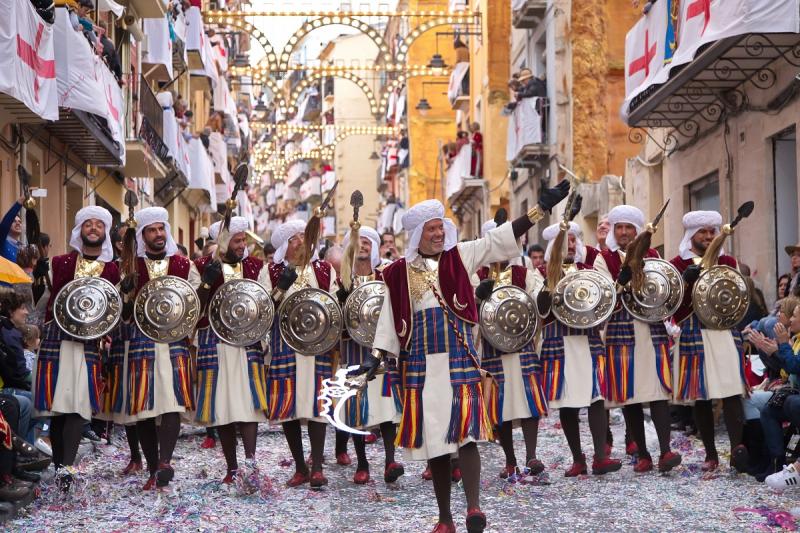