The city of Valencia has many attractions that make it an ideal place for any tourist. In the Turia capital, we can find traditional routes to experience the Valencian culture up close, fine-sand beaches where you can relax, gardens where you can go for a walk or practice sports, a complete agenda with cultural events throughout the year. But if you are interested in gastronomy, Valencia is a mandatory stop, where you can find various municipal markets with fresh products from the fish market and the Valencian orchard to delight our palates.

Among these markets, the Mercado de Colón stands out, located on Calle Jorge Juan, number 19 in Valencia. This market is a clear example of the Valencian modernism of the turn of the century, designed and created by the architect Francisco Mora Berenguer between 1914 and 1916. With a vast gastronomic offer, it has been consolidated year after year as a centre of the Valencian gastronomy and its markets.

History and architecture
The Mercado de Colón is considered a work of art; its design extends from the conception of the building to each of its elements. Mora designed with particular interest the columns of cast iron, brick, and polychrome ceramics that cover the facades with mosaics. It is also worth mentioning the glass he used, stone masonry, artificial stone, and carpentry. It is clear that Francisco Mora placed particular emphasis on every detail of this magnificent building.

It was inaugurated on December 24, 1916, on Christmas Eve, with a spectacular event. From the bullring started a parade formed by the Guardia Municipal Montada, the Roca de la Fama, the market vendors, groups of "La Pesca", “Aves y Carnes” y “Flores, Frutas y Hortalizas,” a chariot with the Reina de la Fiesta and her court of honor, the Municipal Band and a section of the Guardia Civil.

Over the years, the market was declining; merchants were retiring or merely closing due to deterioration and lack of maintenance. Its condition, jointly with the lack of parking and the need to prepare the market space for modern uses, keeping with the needs of the time, made it necessary the rehabilitation of the market that ended in 2003.

The project mixes different uses on the ground floor, its first underground level is organised to accommodate new services and commercial spaces, and the three lower levels have been allocated to parking. After the restoration, the Mercado de Colón has been transformed into a gastro market with different establishments dedicated to gastronomy and with three of the original stalls: a deli, a fish shop and a fruit store.

Gastronomic pole
The Mercado de Colón has become a gastronomic reference point in Valencia, with more than 20 stores dedicated to hospitality and produce. The visitor can find a wide variety of gourmet products in its fish shop, delicatessen, greengrocers, and butchers, as well as some of the best restaurants in the city.

Breakfasts, snacks, meals, after work, dinners, this market is a meeting point for any meal of the day. It currently has four restaurants, seven coffee shops and breweries, two horchaterías and a pub, where you can eat, have a snack or a drink.

Besides, the market has an agenda of events throughout the year, some of them dedicated exclusively to gastronomy, such as wine and cheese tastings, the truffle market, the artichoke's week, or food workshops such as the one that was carried out in 2017 on heart-healthy nutrition by Alberto Chicote. For more information about the events, check out their website 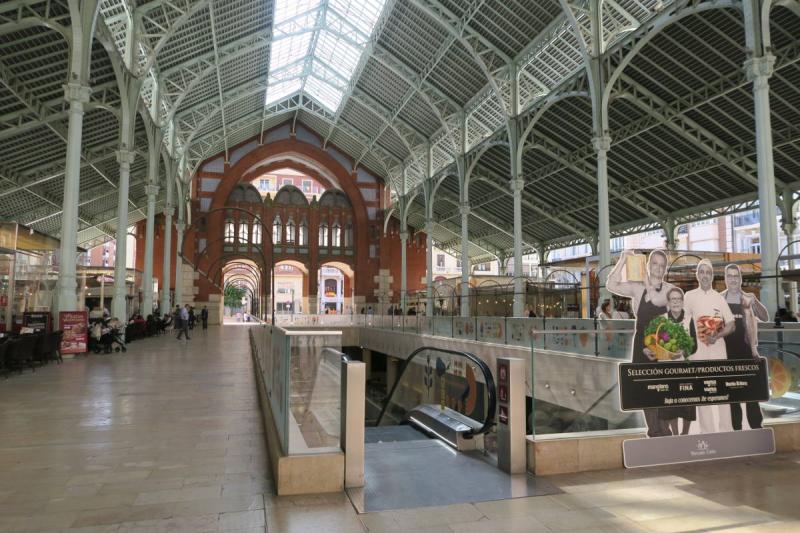