Ten Things You Should See in Alicante

Located south of the Region of Valencia, Alicante is a dream destination to enjoy the Mediterranean coast and at the same time discover this small city filled with sights.

Known for its classic tardeo or spectacular bonfires, Alicante offers much more to the visitor, with options for all tastes and ages. Below, you will find ten of the places you should not miss in this wonderful city.

Castillo de Santa Barbara
This castle is located in the heart of the city, on Mount Benacantil, at 166 meters above sea level. Although archaeological remains of the Bronze Age, Iberian, and Roman have been found on its slopes, the origin of the current fortress dates from the late ninth century. On the 4th of December 1248, Alfonso de Castilla took the castle from the Arabs. Hence its name, since the 4th of December is Santa Bárbara's day.

It can be accessed by car for free or by lift from the Avenida Juan Bautista Lafora. From its walls, there are stunning views of the city and all its surroundings that are well worth it.

Paseo de la Explanada and marina
The Paseo de la Explanada is one of the most popular routes in the city of Alicante that runs parallel to the port, from Puerta del Mar to the Canalejas Park. It is composed of six and a half million tiles that draw a wavy mosaic of red, blue, and white. Also, there are four rows of palm trees, restaurants, and souvenir stalls along its more than 500 meters.

Next to the Paseo de la Explanada, we find the Alicante marina, dedicated mainly to commerce, fishing, and recreation. Currently, this port marks the beginning of the Volvo Ocean Race, the round the world sailing for nine months.

Playa del Postiguet
In the heart of the city of Alicante, at the foot of the Santa Bárbara Castle and next to the Paseo de la Explanada, we find Postiguet beach, one of fine sand and calm waters, offering an oasis of peace for sea lovers. On this beach, you can sunbathe, let the children play in the various playgrounds, or enjoy a swim in the warm Mediterranean waters.

It is one of the most beloved beaches by the people of Alicante, and the protagonist of the famous song "La manta al coll i el cabasset, mos n'anirem al Postiguet."

Mercado Central de Alicante
A building with elements of modernist inspiration located on Avenida Alfonso el Sabio. It was designed by the architect Francisco Fajardo Guardiola and finished by Juan Vidal Ramos in 1922.

Inside, there are numerous food stalls, with fresh and high-quality products. There are several places around where it is usual to see groups of young people ready to start the tardeo. During the week it is open from 7am to 2:30pm and on Saturdays and eves of public holidays from 7am to 3pm.

Museo de Fogueres
The museum of Fogueres in Alicante, located at Rambla Méndez Núñez, 29, shows the visitor how the most representative festival of the city that takes place in June has evolved: Les Fogueres de Sant Joan, a celebration declared of International Tourist Interest in 1983 and an Intangible Cultural Asset in 2013.

It is a unique space where you can contemplate the collections of pardoned ninots (the sculptures saved from the fire the night of San Juan), bonfire models, photographs, typical costumes, etc. so that the viewer gets an idea of ​​the magnitude of the event, its elements, and the importance it has in the city of Alicante.

Located in an elevated area above the city it offers unparalleled views. Of particular relevance are the Chapel of Santa Cruz of the eighteenth century and the Brotherhood of the Holy Cross, famous for the procession held in the neighbourhood on Holy Wednesday.

The Parque Monte Tossal, a theme park that combines the real geography with the fiction of the Region of Valencia and its districts, has been built next to the castle.

Calle de las Setas
San Francisco Street, more popularly known as Calle de las Setas  or Mushroom Street is a pedestrian street in the centre of Alicante that links the Portal de Elche with Plaza de la Puerta de San Francisco. During the late twentieth century, the road was very deteriorated and had a neglected and lugubrious aspect until after several attempts to solve the problem, at the end of 2013 the mayor of Alicante decided to thematise the street with large mushroom figures.

The floor was painted green and yellow, and hops were drawn, drastically changing the appearance of the street. Despite the initial controversy, nowadays the road attracts today many tourists, which has favoured the increase in new businesses.

Plaza Los Luceros
It is the most emblematic of the city of Alicante and links the avenues of Alfonso el Sabio, Avenida de la Estación, Avenida del General Marvá, and Avenida Federico Soto. In the centre of this square the beautiful Fuente de los Luceros stands out with four horses surrounding a central monument.

It was designed by the Alicante sculptor Daniel Bañuls Martínez in 1930 and is currently the centre of various events in the city such as the Parade of the Three Wise Men, the bonfires parade, the place where the mascletás take place, and the location where the fans of the Hercules Football Club go to celebrate their victories.

Archaeological Museum of Alicante (Marq)
Located in Dr Gómez Ulla Square, the Marq was inaugurated in the year 2000 in the building of the former San Juan de Dios Hospital. This museum stands out for its modern aesthetic, its use of audiovisual and computer media, and the didactic nature of its explanations.

Its various rooms (prehistory, Iberian culture, Roman culture, Middle Ages, and modern and contemporary cultures) hold more than 81,000 pieces showing the richness of the history of the Costa Blanca and the passage of civilisations through the Mediterranean. Also, it also has a temporary exhibition area. 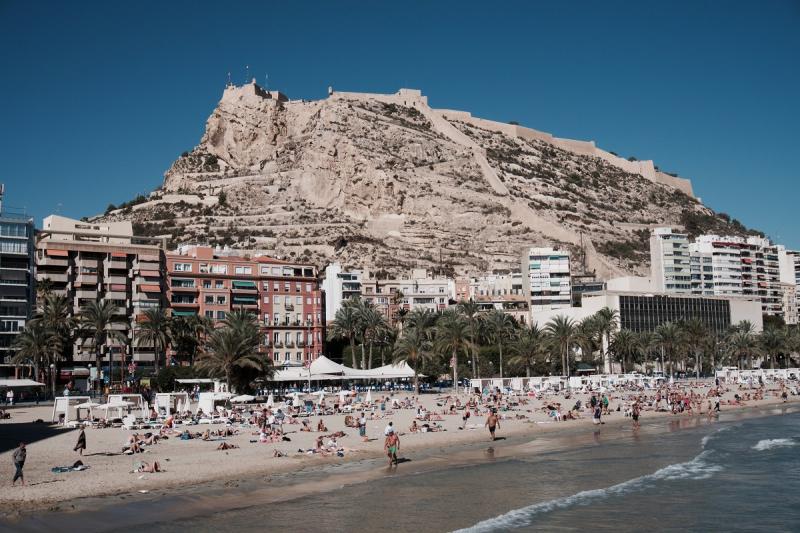 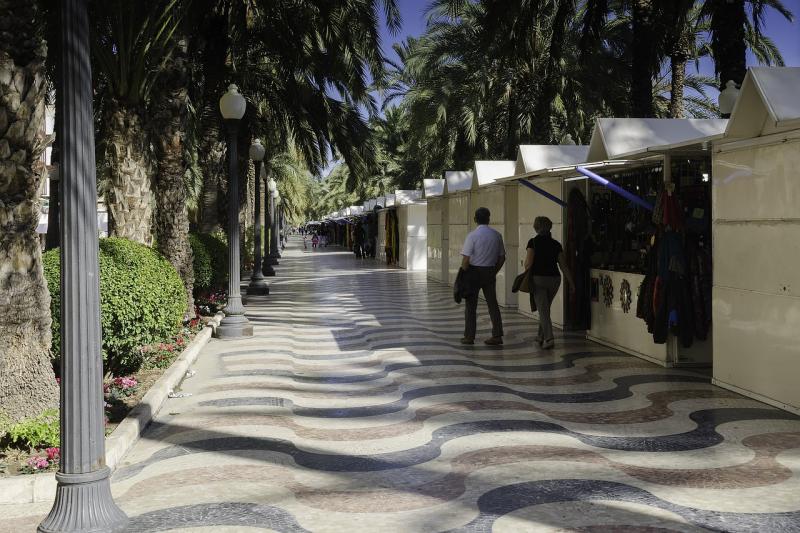 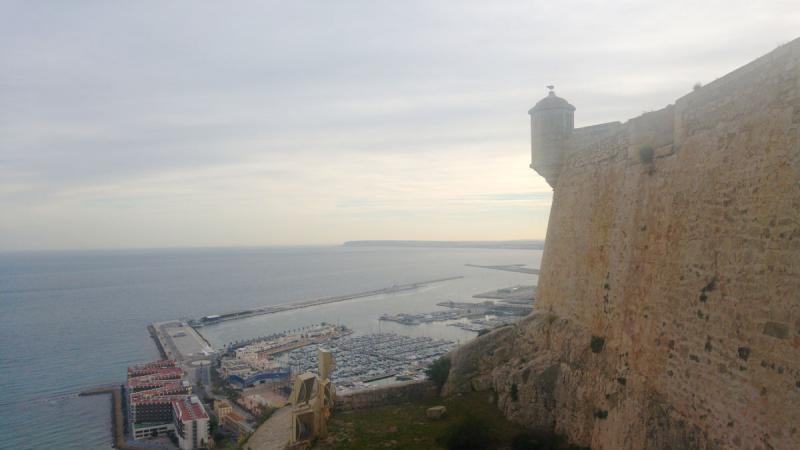 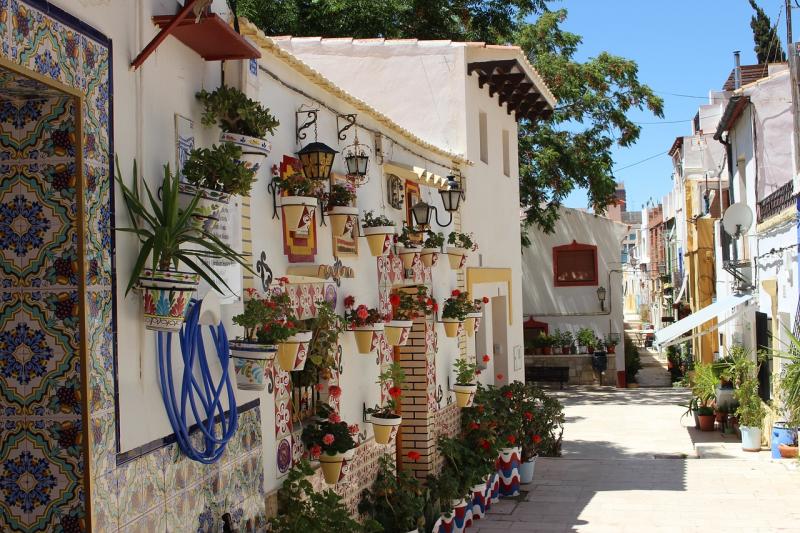