The neighborhood of El Cabanyal de València is one of the most charming areas you can find in the city of Turia. It is the old maritime neighborhood and, after some years of decline, works are on the go to recover it. The Cabanyal is very close to the sea and it still keeps the essence of the neighborhood of good old days.

Speaking of the Cabanyal de València is to speak about a neighborhood of marine essence. The city hosts more and more tourists attracted by its good climate, its delicious cuisine and the charms of its beaches. However, there are also attractive areas such as the Plaza de la Virgen and the Cathedral area or the Carmen neighborhood, which are a mandatory stop. The same happens with the City of Arts and Sciences. Here, we propose you a visit to the neighborhood of Cabanyal that, although it is not so typical, it will surely surprise you pleasantly.

El Cabanyal is one of the so-called Maritime Villages of València. In the past, it became an independent municipality but since the end of the 19th century, it has been part of the city's administration. Once we are in El Cabanyal, east of the city of València, we will discover one of the characteristics that make it a unique neighborhood. It's about their houses. Most of the houses were old fishermen’s huts and they are one of the best examples of modernism in València.

Get lost in the streets of El Cabanyal de València and discover the colors of these houses, which were declared Site of Cultural Interest in 1993. The streets run parallel to the sea and they give a good sample of their origin with a varied range of colors in the same street. The use of tiles in the facades is one of the signs of these old sailors’ houses in the Cabanyal district. Thanks to this, we enjoy a unique network of streets where walking along is a pleasure.

In recent years, the neighborhood of Cabanyal is living a period of revitalization. Numerous shops and restaurants have opened to give new life to the area and attract new inhabitants. Part of this success is thanks to the Ice Factory, an old industrial building next to the Cabanyal Beach, which hosts all kinds of workshops and cultural events.

One of the most important events of Cabanyal de València is its Semana Santa Marinera, a unique and different celebration that attracts many Valencians to the neighborhood. It is clear that the Cabanyal is becoming a neighborhood full of life and one of the new tourist attractions in the city of València so do not hesitate to approach and discover everything that El Cabanyal has for you. 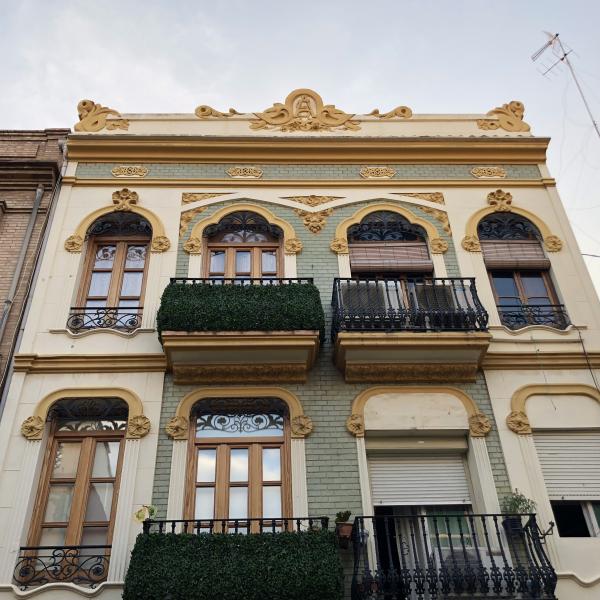