What do the Region Valencia Centres offered?

A minimum of 100 kilometres of circuits, perfectly mapped and marked, designed for all members of the public.

A reception point offering services of attention and information about the ATB Centre itself and about its surroundings. It also has a cycle hire service, parking area, areas equipped for washing and repairing bikes, showers and toilets, first aid service and supplies.

A standard of quality in the ATB Centre’s services and infrastructure, with supervision and backing from the Regional Government.

Starting off points and signposting
Most of the itineraries are circular and set out from the reception centre. They are marked routes, interconnected and may be undertaken either as standalone trips or as part of longer expeditions.
At the reception and information points you will also find an informative map showing the ATB Centre’s network of routes and indications of the different services offered.
All the routes have a complete signposting and waymarking system made up of different signs positioned along the entire route and especially at crossroads.
The boards indicating services and directions of the routes are placed on speciffic posts or on natural or urban supports.
Classifications of the routes
Every ATB Centre proposes various routes of differing levels of difficulty, along stretches with scant motorised trafic and generally not asphalted. The routes are classified by colour according to the level of diffculty (distance, gradient or unevenness of terrain, possibility for cycling or state of the road):

The Region of Valencia ATB Centres have standard signposting used at other European ATB centres. Every direction sign bears a coloured number incorporated, indicating the route being travelled and its level of difficulty.
Bilder 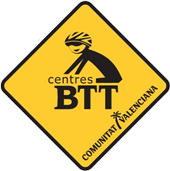