×
The festival of San Juan Bautista, patron saint of the town of Siete Aguas since the Christian Reconquest of Jaume I in 1260, stands out because it has not yet lost the traditional features that characterize and make it different from the similar festivals. These festivities begin with the closing of the school year. A dinner of brotherhood of all students, parents and teachers is organized, which includes a playground with attractions. On the night of 23 June, the "Magic Night of San Juan" is held, where it is tradition that all people, at midnight, approach to the source of the Seven Sewers and wash seven times their faces, asking every time a wish for the new season. Then, a bonfire is lit, where every person will burn a paper with everything unwanted. The traditional seven leaves of laurel are given away to place them under one's bed, as a symbol of good fortune for the future 'year'.

Many anthropologists consider this festival a slightly modified version of what would be the Roman festival of the summer solstice. On the 24th, the greatest festivity in Siete Aguas, a Holy Mass sung by the Polyphonic Choir of the Musical Society 'La Paz' of Siete Aguas is celebrated. Then, a reception is held for all people who volunteered selflessly for the municipality. In the afternoon, the solemn procession that ends with the 'shooting' of a large fireworks display is held. The day ends with the representation of a variety show. Later on, the popular bullfighting events start. 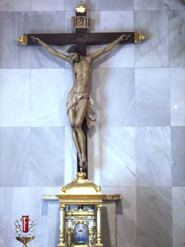 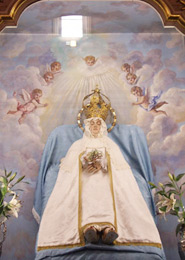