History of the Fallas

The origin of the festivities of the Fallas goes back to the old traditions of the local carpenters, who burnt their old rubbish along with the wooden devices they used to hoist the candles that lit their workshops during the winter months, on the feast day of their patron saint, Saint Joseph. This is why the day of the cremà (burning, the day on which the Fallas are burnt down) is always the 19th, Saint Joseph’s day.

In the 18th century, Fallas were simple pyres of combustible material burnt on the night of Saint Joseph’s feast day. These fallas gradually evolved, adopting a critical and ironic tone, displaying scenes of condemned social behaviours.

Around 1870, popular festivities such as Carnival and the Fallas were actively repressed. This pressure gave rise to a movement that defended typical traditions in 1885, with the creation of a magazine, “La Traca”, which nominated the best Fallas. This led to competition between neighbours and gave rise to artistic fallas, which maintained their critical spirit combined with an aesthetic appeal.

In 1901, the Town Hall of Valencia itself granted municipal prizes to the best fallas. This marked the beginning of the union between the people and political power, as the festivity made giant leaps in what concerns its numbers, its structure and its organisation.

In 1929, the first contest of signboards to promote the festivities was held, and the Fallas Week was created in 1932. During these years, the Fallas became the main festivity in the Valencia Region, with over 700 large and small fallas being burnt in Valencia alone. 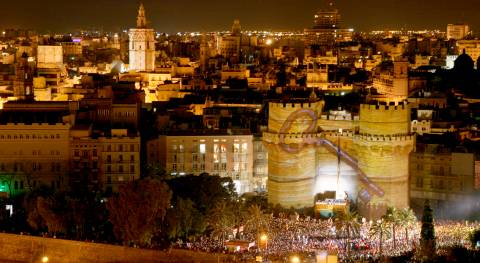