Vertigo Adventures Through the Suspension Bridges of Chul...

Vertigo Adventures Through the Suspension Bridges of Chulilla

Just one hour from Valencia (60 kilometres) there is a little known but spectacular path: Chulilla Hanging Bridges Route, a vertiginous adventure.

This route, also known as the Chulilla Swamps Route, is in the vicinity of the small town that bears the same name, inside the Turia River Canyon, a real natural paradise. Here you will find all the secrets for a fascinating excursion in the Comunitat Valenciana.

The town of Chulilla

Before going on the excursion, it is worth spending some time in the town of Chulilla, one of the most beautiful villages in the Valencia province. It is characterised by its white houses and old castle, located at the top of the hill. You can walk up to the castle by a cobbled path and from there, enjoy the views.

The history of Chulilla bridges

The hanging bridges of Chulilla that you can see nowadays are new, they were built in 2013, but their history goes back further in time. In the Spain of the 50s many marshes were built, one of which is the Loriguilla Reservoir, in the vicinity of Chulilla. The men who worked in the construction lived in town, and to shorten the distance they travelled to reach the reservoir, they built two bridges: a fixed bridge and a suspended bridge, so they could arrive at work in less time. Unfortunately, a flood destroyed these bridges in 1957, and it took more than half a century to rebuild them.

The route takes place inside a canyon, also known as Hoces del Río Turia. This gorge has impressive vertical walls, more than 80 meters high, often climbers try to conquer these walls. The trail is about 5 kilometres, crossing the River Turia several times and bordering the walls at the top.

The first bridge is 15 meters high above the river, and it is about 20 meters long. If you have vertigo, you may be a little scared to look down, but rest assured the bridge is safe since it is supported by steel cables anchored directly to the rock. In any case, it is always better to be cautious and not to cross the bridge in large groups. The other bridge is longer, 28 meters, but crossing it is less vertiginous since it is only five and a half meters above the river bed. The views from the bridge are beautiful, so we advise you to stop for a moment while on the bridge to enjoy them.

Near the path of the Hanging Bridges Route, you will find another magical place that deserves to be visited, Charco Azul, an idyllic lake that looks like a natural pool where the surrounding mountains are reflected. You can get close to the lake by some catwalks (although these are not in the best state) and, in summer, you can even take a dip. 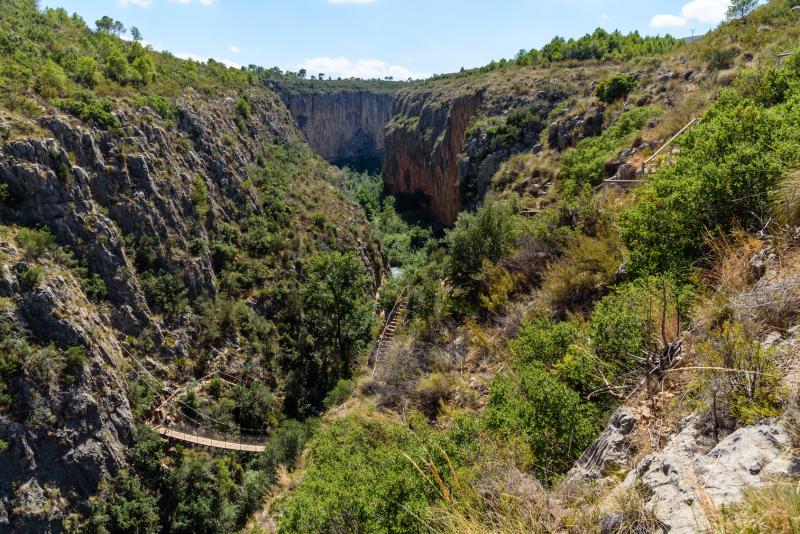 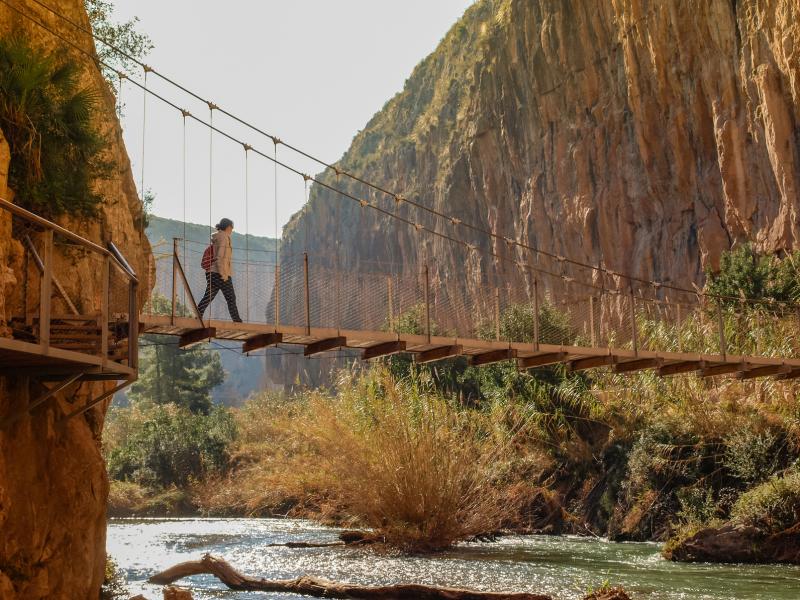