×
The first weekend of September, the festival in honor of the Holy Christ of Sumacàrcer is celebrated in this small town. It is an effigy of the fifteenth century which is venerated with great devotion by both residents of the municipality and elsewhere, for example, from Cocentaina, Beniarrés and Almansa. History tells us that the image was drawn by a flood of Albaida River and then came back upriver through the waters of the Júcar River until the district of Franc, where it was found by some Moors who were making firewood for a bonfire. 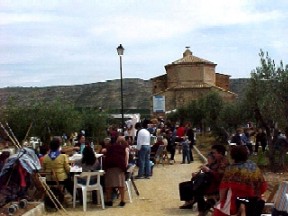